This page is dedicated to tidbits that don't justify full blogposts

I found a set of fantasy-themed stationary from the early 80s at a local craft reuse store. Lest I ever ran out of the sheets, I've vectorized the images and present them here for the reader's edification. 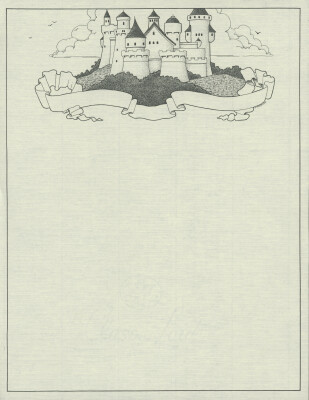 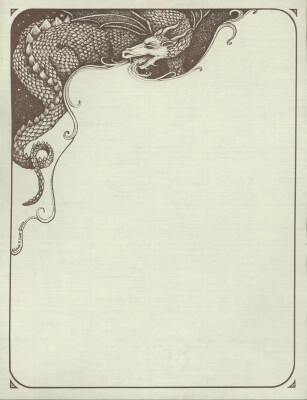 I remember several years ago I was in a Lyft headed down I-75 in Detroit toward a Movement afterparty. I was not in a sober state, but I recall clearly that the streetlights flickered off one-by-one as we passed them. I don't imagine that freeway lights would be tricked into believing it was day light by a single car's headlights. Even residential street lights require a powerful laser or a Maglite (as in my experience) to do the trick. The driver didn't seem to notice, but my friends who were in the car did. Perhaps it was just the sad state of Detroit's infrastructure or maybe we were a bit too exhausted from being pilgrims to the home of techno.

Looking into it, there's actually plenty of pseudoscience around this phenomena, but I would rationally agree that it's best explained by selection bias. Only a few other times have I been startled by a flickering light or a particular harmonic of a buzzing machine. That being said, I have always been fascinated by the description given by the editor of THE DXM ZINE, a text-based zine from the late 1990s, while taking dissociative amounts of cough syrup (AKA DXM):

STREETLIGHTS AND OTHER ELECTRICAL PHENOMENON
by Gravol, DarkElf

Shortly after my first experiences with DXM, I started to notice strange occurances of streetlights either going on or off as I would pass them. Sometimes I would just simply look up at a burned out light and it would flicker a few times, then come on. Usually it would be the same couple of lights, night after night. You may think, what does this have to do with DXM? Well, I didn't really think much of it until I talked to two other people, each reporting the same phenomenon, convinced that it is tied to something beyond our regular grasp of technology. What causes these strange episodes of electrical malfunction?

Some may point out that the lights are on sensors and as you pass them, they detect headlights, but that theory is often shot down due to the fact that you may have already passed the streetlight when it lit up, or you may not even be in a car at all. On one night, I had just been walking out of the movie theater with my girlfriend when right as I passed under it, a theater light (affixed outside the movie theater) shut off, while the one just before it continued to glow. We both noticed it. It's to the point that now everytime I'm out somewhere driving after dark, I notice some strange activity with streetlights either turning on or off, flickering, or both.

Also, from what I've heard it may not just be limited to streetlights. Other electrical devices such as radios and anything else you can imagine may also be effected. Some say it has to do with supernatural forces, since it has been noted that in some cases ghosts like to mess around with electricity. Others may point out it would be something inside our mind controlling the devices. And yet others may scoff and call us insane.

Now, after talking with the two other individuals that have reported this, I realized I may not be crazy after all, and I'm also not discounting this as a simple case of paranoia. I do not know the intricate workings of a streetlight. If you do, on the otherhand, and know what may cause this disturbances please feel free to email us. I am passing along the insight of one of those individuals below:

The first time I experienced anything strange was with a group of friends. We were on DXM swimming in my pool, with music on the radio playing. Suddenly, the radio just shuts off. As I start to get out of the pool to see what happened, it comes back on again. So, I shrug it off and continue with the joyous DXM-swim fun. Later on, it shuts off again. I then ask my friends if they know what's going on.. of course, they don't. Then it just starts up again. This happened about 4 times that night. At the time, I just attributed it to a short somewhere (it was not the electricity -- the pool light was on the entire time.) Strangely, though, this never happened again while we were sober.

At another time, my current gf and I were both on fairly high doses of DXM talking on the phone. Close to the peak of the trip, she says (for whatever reason) "show me you're here." So, believing that I indeed could, I start trying to vision myself there. Immediately, the phone goes dead. There was no hangup, no click.. just an instant dialtone. So I hang up the phone. A couple seconds later, the phone rings and I pick it up. I then thank her for calling me back, and she says she didn't -- HER phone rang. Just another strange incident.

Now, the previous two odd occurances I just figured were coincidences until this happened -- at night, random light poles on my right side starting turning off (a few turning on) right before I passed them, usually while driving. At some point, I started to notice this happened a bit too much, so I started to count them. Since March of this year, I've counted 33 light poles doing this. Also, I've noticed the circumstances under which this apparently occurs:

1. I'm in a good mood
2. I'm NOT thinking about it (I've tried many times to consciously turn them off. All attempts were unsuccessful)

After reading a few books on NDEs (near-death experiences) I've found a few things that fit together. It turns out that people who have experienced NDEs report a threefold increase in paranormal phenomena. Two drugs are mentioned as being able to induce NDEs: morphine and ketamine. DXM is not listed (probably because it isn't known), but obviously fits because it's a morphine analog that is very similiar to ketamine in high doses. Furthermore, a certain doctor (I forget the name) that supposedly took ketamine for a hundred days straight says he came into contact with "cosmic coincidence control." A strange thing for him to say, considering all of the coincidences that have occured since I started DXM.

So IS it all a coincidence? Am I just being superstitous? I don't really know, but every time I'm driving down the street and a light pole on my right side goes out right before I pass it, the more convinced I am that this is something paranormal.

Perhaps also of interest is this interview with Gravol from 2002.

As someone who knows how to save money, but also how to hoard, thrift stores are a pretty frequent stop for me. I often enter without looking for anything and leaving with an armful of something I really don't have room for. Now in this particular case, I didn't leave with it, but rather ogled it while my roommate frowned disapprovingly. It was a very cool CRT television with vintage stickers, built-in VHS-player, duct-taped antenna, and basically everything that would make it the perfect TV to grow up with. So naturally I grabbed a nearby VHS to see what would come from it. The VHS happened to be unlabelled so I'd be killing two curiosities with one play button. The result is below and shows why that TV is not sitting in my room right now

Now remind me to post the videos from my broken camcorder that only shoots glitched footage.

Taking advantage of the couple of hours I had before my laptop's f.lux took over me into sleep-mode, I decided to quickly set-up my GPG key in the hopes of consistantly using it from then on. I ran through the standard CLI set-up and was about to tote my pretentious security progressiveness all over this website when I leaned my screen back. Something in the way that 12 hours of caffeine injection was playing with my brain showed me the very clear image of a demon skull in the background of my GPG pub key. Say what you will, my coworkers got a kick out the story, but this being interpretted as this just goes to show you that I should go to bed earlier.

Note: Still trying to come up with a good pun/relevant article about GPG and evil. Hit me up if you've got a good one (send it encrypted)