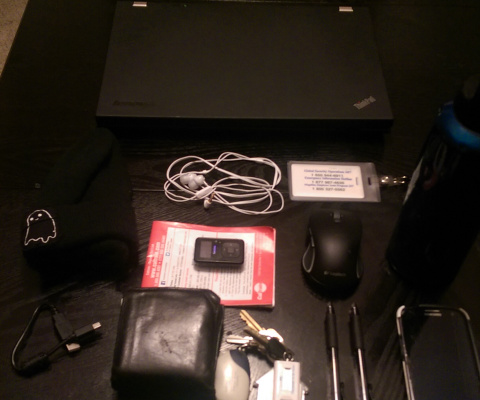 My every day carry from early 2015 and apparently the only photo I have of my Nokia N900, contents redacted due to cringe

The middle of a stay-at-home order feels like an appropriate time to reflect on a small pastime I picked up when I was in college. Spurred on by my purchase of a Thinkpad and later an old, strictly-for-note-taking Nokia N900 , I began sitting down in common spaces around campus or public transit and simply writing down (relatively) objective descriptions of the people in the area. The intention was to become a more interesting writer and try to notice the quirks about humans that might typically escape me. Years later I would hear from a friend that he had a similar practice except it was to learn, as a self-described sociopath, how to behave in social situations. While I like to think I had pretty much figured out that sort of etiquette by my late teens, these notes do often point to the fact that I could still be pretty cringe.

I kept at this hobby for a few years, starting around the time I was writing music reviews for a friend's blog until I started doing more socially-interactive activities I suppose. Despite the limited number (and honestly poor quality) of entries I composed, I've found it amusing as a trip back to those years of being outside my stuffy apartment, in the presence of strangers in transit to wherever. Maybe once the pandemic is over, I'll pick this hobby up again. It certainly has a flare of the era in which it's written that's not always preserved otherwise.