I love working from home and it has been a blessing for my mental health to be able to take breaks to be with my six-month-old son and walk around outside every now and then. Being away from the bright lights and commotion of the open office has boosted my productivity and allowed me to prepare healthy meals with garden-grown produce. However, about a 10 months into working from home, around the beginning of this year, I began to develop headaches in the early evening. I wouldn't classify these as migraines, though I have a family history of those, but they became sufficiently distracting that I call workdays early, even if I was in the flow state, to go lay down.

When I welcomed my son into the world, I also welcomed the parental leave that gave me the opportunity to reduce my daily screen time from 8+ hours to maybe 30 minutes at the most. My eyes were focused on the garden, the deck that needed patched, on the changing table, but not the computer screen in the office. However, I knew something needed to be done about my work situation when I returned. A number of variables existed-- eyeglasses, air quality, lighting, sleep, but I started with the one that I thought would be the most likely fix, my glasses. But as this list shows-- I'd spent months trying to track down the cause. Here is a brief log of my exploration.

Optimistic, I visited the optometrist who surprised me by telling me I had been misdiagnosed with an astygmatism and that my prescription was definitely wronng. A couple weeks later I had acquired a cheap pair of dad-style glasses. After several days of fairly painful adjustment, I was back in business. Boom, no headaches. But at this time, I was still spending my days taking my son on walks in the yard and napping in a rocking chair.

Not even a sprint into my return and the irascible pain returned, generally in the early evening. So the experiment went on.

Living in an area prone to significant wafts of wildfire smoke, I figured this may also have been to blame. I had absolutely experienced the debilitating effects of smoke inhalation during the Dixie and River fires. I had even gotten a PurpleAir sensor. But this year had been eerily devoid of any major smoke incidents and the pain had started during the rainy season. I can't blame climate change on this particular anxiety.

So was it the work itself? Multi-tasking certainly can be mentally taxing. Given I'd been at the same company for several years, I'd become somewhat known as a person who can do certain things. This means a decent amount of often frustrating interrupts. While I wouldn't entirely rule out stress as a factor, these headaches developed in a time in which my project work is fairly light. Furthermore, by the early afternoon, I'm starting to cool down as my east-coast and central-time coworkers have started to head off for the day. Call me a tool of the Man, but I feel like trying for a different role and then having to successfully pretend I know how to be an engineer for a year and some would be a lot more stressful. Let's try something else.

Simple! Lots of ergonomic recommendations exist about lighting. In particular, this PDF that my company shared suggested the angle that the sun hits the screen might have an effect on eyestrain. Sure enough, in the early afternoon, the sun gets high enough over the trees to hit my monitor. So sure I was that this was the cause of my consternation that I went and downloaded a solar path tracker app and tried to see which positions in my office got consitently perpendicular light from the sun throughout the year.

My house sits a little askew-- maybe at a 40 degree angle from a longitudinal, so I figured that if I were to move my desk 90 degrees clockwise, from a northwest corner with the suspect window to my left, to a northeastern-facing location near the center of the room I'd be able to get some nice filtered morning light on my right and indirect light the rest of the day. The plans fell into place when I saw a cheap (and freaking huge, I later realized) desk on Craigslist. It gave me the chance to completely redo this office room's layout. 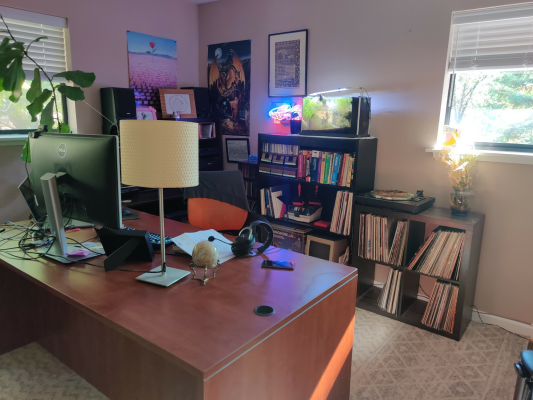 I love it, but it didn't help the headaches!

The big sexy thing back when we were still in the office were the 4K monitors that were slowing getting phased in. I really didn't care for them-- being content to use a couple 1080p screens. But eventually a want of desk space moved me over. It's hard to read the scaled text! It took me awhile to get adjusted but I soon found the ability to have (horribly disorganized) windows at fullsize to be a necessity to be productive at work.

Naturally, when the office moved out of San Francisco and into my Oakland apartment living room, this monitor had to come along. Now, I'd kept the system resolution pretty much the same throughout the almost three years I'd been using it, but maybe I was getting old. An easy test here was to change the resolution to be larger. I suffered through a couple days of unnecessarily large text before realizing that wasn't the whole problem. And how could I give up all of that workspace real estate!?

Much of the advice on eyestrain I'd seen recommended taking frequent breaks. I do that so often! Especially now that I have a little one about the house I'd say it's rare I'm in my seat for over an hour at a time. It's part of the benefits of working from a home with a garden. I don't really need an excuse to get up from my desk. It has done wonders for my mental health and temper, but hasn't been enough to allow me to ease into the evening without that irritating presence in my forehead.

Alcohol can be blamed for a lot of things so this was an easy target. I really don't drink much anymore, but I'll indulge a beer or two if I'm with my parents or playing a video game. I know what a hangover feels like and I haven't gotten one in a long time. Nonetheless, cutting alcohol from my diet was pretty straight-forward so sober I went to bed each night. No dice, though I did end up a bit less cranky. Even if it wasn't the alcohol specifically, could it be caused by dehydration in general?

I feel like I drink a lot of water. I have a glass with every meal and several in-between. I don't drink soda or even La Croix so my thirst isn't competing with less-optimal sources of hydration. But more water I drank (and more water I still drink because it can't hurt) and little did it change that early afternoon timepiece that loved to shutdown my mental processes.

Running out of variables, I grasped at sleep. I took advantage of the chaos in my circadian rhythm caused by helping care for a newborn to adopt a more rural sleep schedule. Waking between 0600 and 0700, if I wasn't in bed by 2200 I would feel it the next day. Intentionally sleeping earlier didn't have much of an impact that I could tell. I sleep a lot so I guess it's sort of diminishing returns over 10 hours.

Something I hadn't really noticed until really digging into this problem was how loud my make-shift server rack has gotten. I picked up a pretty nice UPS the previous year and the thing is twice as loud as my NAS. I used to sit right next to it and it didn't bother me, but maybe its new position was throwing off my senses again. Perhaps grasping at a reason to get a slightly-more professional headset than a HyperX Cloud, I went and got a used pair of Sony noise cancelling headphones. Despite my skepticism, I'm pretty impressed by the noise cancellation. Alas, I still got headaches and I also lose some contextual awareness of goings-on about the house. But the headphones have stayed if for nothing more than the finger gesture controls.

Well shit, that was a whole lot of time spent without a good answer. I had started giving up and either napping or trying to take ibuprofen post-factum. I considered seeing a doctor, but given the minimal success my father found after tens of thousands of dollars spent seeking relief from migraines, I was a bit wary. So in a conversation with my manager, I shared the struggle I was having. She's quite understanding, but gave me an anecdote from when she first got headaches at work.

"I went to the doctor and explained what symptoms I'd been having. He looked at me and said 'Welcome to your 30s!'"

So maybe that's just it. I'm getting older and this is the shit everyone talks about. While I wouldn't say I've given up, I've taken my manager's advice and picked up a bottle of Excedrin. That shit kicks ass. It kicks my ass. The amount of caffeine in the recommended dose feels like I just railed some cocaine, but hey it helps me get through the day. And this body is fleeting so what the hell if I have medicate a bit to pay the bills.