I've found that I've developed a strong emotional attachment to the stuffed animals my wife and I have adopted since we started dating. The feelings can range from an irrational affection to a grief-like hopelessness. So as a way to get my feelings out, I'm going to write this post.

This is sort of a strange post to author, but I think that's why I'm compelled to do so. Take in mind that I'm 25 years old presently. The only pets I have are fish. My wife and I haven't had any children yet. We live a comfortable middle-class lifestyle in a wealthy part of the country. So forgive me if this seems so entirely like a first-world problem, as it most certainly is.

Like many children, I had a few stuffed animals that I played with. I recall a number of beanie baby dogs, a Meeko (raccoon from the '95 Pocahontas film) plushie and a Pikachu. The latter two are about the size of a shoebox. My parents attest to the fact that I cared for them deeply to the point that they've kept them around the house in the well-worn state that they are. Personally, I recall my attachment to Pikachu by the fact that one of my earliest dreams/nightmares involved it. 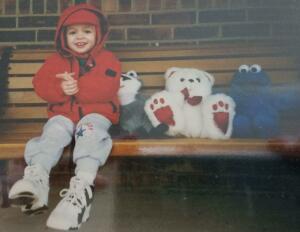 Meeko gets preferential seating, Pikachu gets choked by my father

In the dream I am seated at a table for dinner. When the cover is lifted off the entree, it's roasted Pikachu, sliced and diced, with an apple in its mouth. Despite the fact that I stopped playing with Pikachu around 5 or 6, the dream gave me the willies well into my teens.

In standard American boyhood fashion, playing with stuffed animals became lame as I reached school age and I set them aside. Around the same time my family adopted an energetic puppy which I felt much more attached to. Rather than stuffed animals, I began collecting curiosities. Victor the preserved fetal rat is still on the bookshelf of my childhood bedroom. He was never the type to bring to bed for comfort.

My wife is the only girl I've dated that maintained an attachment to stuffed animals into adulthood. Having never moved out of her hometown, she still had her first toy-- a small Pooh bear the size of a fist and arguably a repurposed dog toy. In addition, years of Bay Area living meant she had accumulated a number of larger friends by taking in unwanted stuffed animals or winning them from the plushie arcades in the area.

The first time we were together, we spotted a giant Keroppi at an arcade in Great America. Given that Yvonne is clearly a fan of Keroppi, we swore that we would win it some day. A few weeks later, several coffees and rolls of coins later we had managed to reach our goal-- Wheel of Fortune spinner game be praised. This Keroppi,dubbed the Great Keroppi, became part of a number of stories we made together: of his kingdom in the woods next to our apartment, a frog baron. He travelled with us to the various apartments we lived in up to this day where he looks over our bed with a kingly eye. He takes up quite a bit of space proportional to our square footage!

Beyond Yvonne's favorite characters (mostly Sanrio, San-X, and Disney), we'd also make stories with her other stuffed animals. Sock Monkey, a sock monkey that doubles as a backpack (or has a backpack depending on how you wish to approach the paradox), began to take a starring role in the stories as a villain. Despite the sour reputation he began to take on, there are numerous photos of us at Angkor Wat, holding him up lovingly. 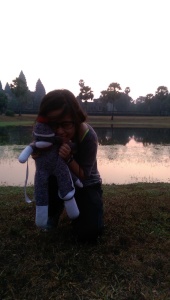 Not pictured: gibbons jealous of all of this affection

The most beloved of the stuffed animals we adopted if Frog, a frog hand puppet from the German home goods chain Butlers that we picked up during a vacation in Berlin. He's got some personality with fingers that don't stick right, long legs that flap around, and hands that can be made to scheme when put together. He's the costar of our Pico-8 game.

The stories we made up became a defining part of our relationship especially as we spent half of our first two years together living across the country for each other. It gave me a chance to practice my writing skills and it gave her a fun set of prompts to draw. The canon around these characters would grow into a massive card game, a Shakespearean play, a number of mystery stories, several crossword puzzles, a choose-your-own-adventure. At one point we had a scrum board to keep up with all of the projects. The fun we had helped cement our relationship.

Once I had moved to California, we'd adopt a number of more friends. There is a Yamani frog named Squish, a Mochipuni Pig named Pig, a couple stuffed whale sharks named Whale Shark and Whale Shark 2, and an narwhal named Toothpaste. Given that we have never really been in a situation to afford more than 600 sqft of living space, it becomes hard to justify taking up half the closet space, most of the bed, half the couch, and a decent chunk of the bedroom floor with stuffed animals. 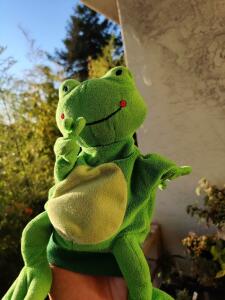 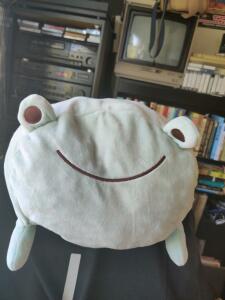 To be fair, many of the stuffed animals double as pillows (and are incredibly comfortable). Having way too many plushies isn't a particularly uncommon situation out here, at least among the anime-inclined folks in my generation, but this huge collection had always sort of bothered me. I couldn't quite place it.

As I'll go into in a post at some point, I'm certainly not without guilt for gathering clutter, stockpiling spare parts and half-baked projects, and scavenging archival materials from the grip of the junkyard. When we move, I feel the full wait of just how much shit we have hoarded. So while a messy living space upsets my mental state, if the apartment is at least neatly organized, I don't really have a problem with the piles of stuffed animal friends we have. What I think has been bothering me is when I see stains and browning on the stuffed animals. We generally do our best to take care of the friends, but taking them on trips, sleeping on them, and even leaving them out in a room with the window open slowly shows. Hell, even the white belly of the Jinbe-san plush that Yvonne got in Saigon had turned a nice eggshell color by the end of our trip there likely due to the smog. Looking at older photos in particular brings to mind just how much they have aged.

And this really sucks. Much as puppies won't be puppies forever, the stuffed animals that we've cherished do lose their softness and form. It's not that we love them any less, but I almost feel bad for getting them dirty through affection or simply passing time. Maybe someday when we have the convenience of a proper washing machine, they'll receive a proper revitalization.

I recall watching an episode of The Repair Shop while visiting my parents in which a teddy bear endearingly called Brown Ted was made whole again. It brought to mind whether I'd have the ability to mend our stuffed animals. I'm a long shot from a tailor, even my hand stitching is rough. It's further complicated by the materials many of our stuffed animals are made of. Squish, for instance is polyester and not machine-washable. I'd have a much harder time trying to fix him up than a sock monkey who is constructed by hand.

To go deeper, I think about what will happen to these stuffed animals when we die. Do we bury them with us like Bronze Age chieftains and their servants? Do we force them upon our children who will almost certainly not care about some crusty plushie from the mid '10s? I can't imagine myself letting go of, let alone throwing away these friends. Unlike living pets who do eventually die and receive the natural period of mourning, the death of a plushie is decided by its owner. This is part of my resistance to getting more stuffed animals. When it takes ten boxes to move all of the friends, the weight of their unending life becomes even more apparent. Left: 2018, Kate visited us and took Frog to the sights of SF. He was in a sticker fascination phase. Right: 2018, me abusing Squish with my drool

And certainly, it'd be evident to most people reading this that the concern I have is completely unnecessary. This emotional distressed is caused by projecting empathy onto unliving beings out of sentimental attachment. It's materialism, propagated by a middle class lifestyle with ample disposable income. My care feels hypocritical to the care I take to avoid single-use bags and buy as much as possible second-hand. But It seems that the anxiety I get when considering the life of these animal-shaped pillows is also an unconscious reflection of my own fear of aging. Their spots and discoloration are like a photo from 5 years ago where you look so different but that felt like merely months ago.

I've been a pointlessly broody person on the subject of passing time since a child. I can recall my first existential crisis was in a department store. Again, the liberty to have these thoughts is reserved for those in a comfortable modern society who have so little to worry about. I must, however, blame the isolation of the coronavirus pandemic for this latest musing. The days blur together as any reader in 2020 would know well.

But fuck it, this isn't supposed to be an incredibly depressing post. I also want to share photos of the friends that Yvonne and I take care of. And honestly, stuffed animals are great! They don't get sick or feel pain, they don't damage the local wildlife or need to be housed during a vacation away. While becoming attached to anything on earth will take you away from your path to nirvana, if you're going to have a family anyway, you'd better get used to it. 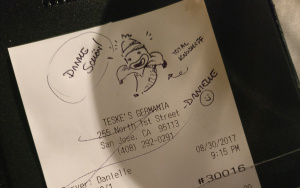 Thanks for reading! Here's a receipt from a sweet waitress who liked the Sock Monkey drawing Yvonne was working on.