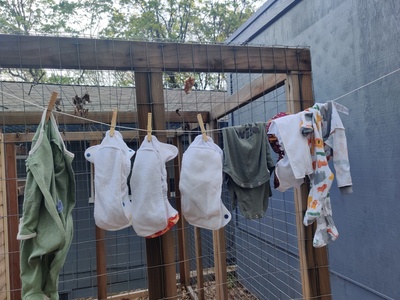 Earlier this year (2022) I became a father for the first time. As mentioned in this post I have some mixed feelings about parenthood. I am simultaneously experiencing a love beyond anything I've ever known while feeling a nagging guilt of adding another human to a crowded, warming world. Having a child gives one the opportunity to think into a future beyond the self, hopefully one that is as full of life as the one we live in today. Now this is a bit heady for the opening paragraph of a post about diapers, but hopefully it does justify a bit of the rationale for trying something other than the Huggies/Pampers disposable diaper duopoly.

The EPA reports that in 2018, 4.1 million tons of diapers were sent to the landfill in 2018 which is 1.4% of the total trash mass. While that isn't necessarily a staggering number even with a fairly stable birth rate, when considering that human waste is entirely compostable, it seems counter-intuitive to resource conservation efforts to be taking this material out of the energy cycle of the earth and locking it in landfills with polymers and other materials that are likely to take much longer to break down and cause potential incursions into groundwater.

The study of sanitation is fascinating and in the writing of this post I took a long jaunt through Wikipedia's explanations of septic tanks, sewage treatment, and landfills. My interest might not be so surprising due to my interest in composting and my recent desensitization to human feces due to changing diapers all day. The point being, while there are impressive technologies that make the most of solid waste and the gases given off in decomposition, being able to process baby waste in situ or get it atleast into the primary sewage system serves to reduce landfill mass while moving waste water and feces into a system that can efficiently process it.

So back to the baby, our son arrived a month early, but fortunately my wife had gotten us incredibly prepared. We'd done our best to get nearly everything we needed secondhand when feasible and safe to do so (car seat and bassinet excluded). However, we'd assumed we'd be using disposable diapers like everyone else-- mostly because I hadn't fully researched how to handle the biggest new category of waste in our household. This piece will be a write-up of my experience with diapering.

Before getting into the categories, I should provide some context on our living situation. My family has a substantial, secluded property in which to compost without disturbing the health or aesthetics of others. This means that we have the fortunate position to be able to experiment with a variety of approaches of composting as well as ways to dispose of or clean diapers. My wife and I both work from home and have the opportunity to keep our son at home as opposed to going to a nanny. Finally, my son is quite well behaved and doesn't seem to have a strong preference as to what is covering his ass as long as it isn't shit. That being said, we're only two months in. I may need to update this post.

At least among our peers, these are pretty much the standard. Single use, plastic lined, disposables. They are often scented strangely, but at least they come in quite large boxes. We started out with these at the hospital which, being a hospital and doubly being a hospital under covid protocols, was obsessed with throwing things away. They serve that purpose well. They are hygienic and sightly. By nature of being made of numerous synthetic materials, they tend to have decent absorbancy. Because of this, we still use disposable or compostable diapers at night. However, we've had more than a few cases of disposables failing to serve their purpose. While each diaper individually may not cost much, the expense adds up in a matter of weeks. If there were ever an apt time to use the term "pissing away money" it would be disposable diapers. But fortunately we're not in a position that I need to make my son sit in his own shit because I can't afford a replacement.

We don't yet take our son out on the town or to other peoples' houses, but disposable diapers do seem like the best option for travelling, daycare, or visiting friends. While feasible, it's unsanitary to lug around soiled nappies and I'd feel like I was really imposing on a daycare operator if I asked them to handle my son's reusable diaper and send it home with him. That being said, I could imagine it becoming socially acceptable to do so again, especially in the hippie county we live in.

As of 2022 I was unable to find any diapers on the market that actually compost in a backyard compost setup. Brands such as Dyper offer a subscription service (of course it's a subscription service) in which they pick up the diapers and take them to an industrial composter. With the amount of energy expended to transport the diapers it might as well have been take to the dump where the same thing would happen if on a slower timescale. Nonetheless, early in our parenthood I ordered a box of Dypers with the intention of seeing if I could manage to backyard-compost them.

Dypers are bamboo-based, but they still have a plastic lining to prevent leakage. While they perform about as well as conventional disposable diapers, the plastic somewhat defeats the point. In addition, they still require energy, raw materials, and packaging to end up with the end user. I'm having a hard time fathoming the volume of diapers that a child would go through until they are potty trained. Maybe it would fill up the room that I'm sitting in now. And only 5% of that would be human waste-- the rest is just the diaper padding and straps. Dypers are definitely the most expensive choice but they have the benefit of using more sustainable materials while still allowing for that modern human convenience of making something go away like as if by the flick of a magic wand.

I've taken a few naive steps toward composting these diapers. Namely I've dug a big hole in a far corner of the yard and filled it with alternating layers of Dypers, food scraps, leaves, and dirt. I guess I'll find out in a few years if these diapers truly needed an industrial composting routine. I likely won't be running any more experiments once this box is out. I've become a convert to cloth diapering.

Cloth diapering used to be the way things were done, but perhaps because of that, it's gotten the connotation of being excessively complicated and gross. It seems to unfairly have the same reputation as the use of karo syrup and cows milk as a replacement for breast milk. Every parent we talked to said they would be a ton of work or cause rashes. Those who personally used them described the scouring process and it didn't sound fun. Nonetheless, I wouldn't stop bugging my wife until she let me try them. And cloth diapers in 2022 are, at least as far as I can tell, far better than the rough cloth rectangles and safety pins used on the Boomers.

For my trial run, I got four all-in-one diapers from various brands. They differ in exact shape-- generally fitted like disposables, but have button snaps (and many extras to allow for growing). The ones I bought have a soft cloth inside with an insert and waterproof-plastic + elastic on the outside and along the leg holes. They are surprisingly effective at containing piss and shit though they don't quite have the track record of the disposables. My son doesn't seem to mind them.

We're blessed that my wife is able to breastfeed without issue. And, I've learned, breastfeed pood is water-soluable which makes cleaning soiled diapers perhaps deceptively easy. The magic, I've learned, is in the last step.

The third step is what refreshes the diaper, bleaches it white again, and keeps it soft. I had not been clothes-line drying my clothes before this, but it may convert me. I'm about six cycles in with the diapers and they still seem as pristine when they come off the line as when we first got them. And I assure you, these diapers have seen some shit.

Since this was a trial run, I only have 4 cloth diapers. The up-front cost is fairly steep, but they slowly pay for themselves. Futhermore, the more diapers you get, the more disposables you can offset, and the more efficiently your washing machine cycles can be. As a bonus, the cloth diapers have cute prints on them! That's how I convinced my wife to let me try them. I do plan on buying more all-in-one diapers, perhaps the size above. There are still many months until my son is eating solid food and even then, maybe it still won't be that bad. And you can bet that any other child we bring into the world will be using these too. I have faith that they'll hold up.

Finally, it's worth noting that the amount of baby wipes really starts to add up as well. We've opted for biodegradable wipes over cloth primarily for convenience, but I could see a future in which we would use cloth wipes and some sort of vinegar solution. However, it's already been enough work to win acceptance cloth diapers in the household. I'll likely spend that capital on more diapers first.

I await the day my son uses the potty and joins the rank and file contributing to the septic and sewage processing systems. For one it's less work for me, and most importantly I don't have to experiment on him any more. But I hope that nothing changes my mind on these reusable diapers by then. It's a hidden gem of cost savings and sustainability for people that give a shit.